Arya is both a distribution and a platform. That means you can use it as is or turn it into a branded computing system to meet your own specialized needs.

Not all potential users want or need to turn Arya into their own Linux build. However, if you like tinkering or actually can benefit from creating your own computing platform, you can. The end result is a fine-tuned computing platform.

You can build it to your specific needs without the usual hassles involved with building an operating system. Arya includes the specialized tools for this purpose.

Linux is rooted in choices. One of my fascinations with Linux distributions is the opportunity to explore new stuff that it offers. Something new or different pops onto my screen nearly every week.

a GNU/Linux operating system built from source code of the various component packages it contains. It is an independent distribution developed in India by Chandrakant Singh, who released version 2.4 on March 14.

If you are hankering for a plain vanilla Linux system with some unique options, check out AryaLinux. It lacks some of the finesse of more established offerings, but it gives you access to a Linux system that is by nature unique.

Apart From the Crowd

Typically, Linux distributions are built by remastering or modifying some other distribution. Singh built Arya from the source code of packages, libraries and applications publicly available over the Internet.

AryaLinux began as a project to take BLFS to the next level. Singh intended to build a complete Linux distribution out of LFS/BLFS. By building in the option to create a user-specific computing platform from source code, he went well beyond his original mission.

You can download the AryaLinux ISO and run the distro out of the box. The default settings provide a reliable working platform. Like a growing number of modern Linux releases, Arya is available only for 64-bit computers. So this distro is not compatible with any very old 32-bit rigs you might have hanging around.

As with any Linux system, you can alter Arya’s settings easily. You can choose the desktop environment you prefer — GNOME3, Xfce, KDE Plasma or MATE. 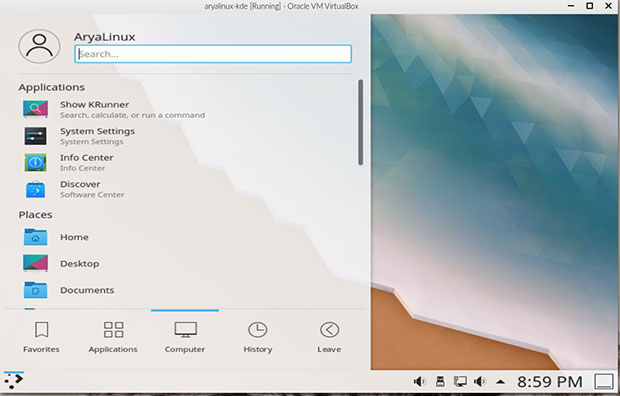 If you venture beyond using AryaLinux as is, you can use it to build a complete distribution from source code. Other Linux distros come with a tool to burn a running system to a new ISO file so users can make an exact duplicate of their system, complete with installed software and unique settings. This makes it easy to deploy the exact computing platform on other machines.

That is not what Singh provides with AryaLinux. Instead, it has bash scripts called “build scripts,” which let users create everything from scratch. The process in AryaLinux includes a dependency resolution and script execution framework — AryaLinux Package System, or Alps — to build the whole system from the ground up.

While this process is not complicated, it does take some hands-on experience and an affinity for working from source code. Singh’s approach automates much of that routine with the build scripts, but it is not a quick job. You need to be prepared to let the machine clank away as the scripts do their stuff.

Most applications in AryaLinux are not installed via binary packages. That is a reflection of the building process modeled after Linux From Scratch. That is also why a real package manager is missing from this distro.

Installing from source is a difficult thing to do unless you have some experience developing software or familiarity with Arch-based Linux. Singh made that process easier with the Alps tool. It handles much of the downloading, building, installing and resolving dependencies for applications.

Alps, which existed in earlier version as strictly a command line tool, now has a rudimentary user interface. Alps provides basic package management functionality like installing and upgrading applications. However, it does not uninstall applications as far as I can tell, at least not easily.

What do i need to start a blog

How to Boost Visitor with the Mailchimp in 2020

How to Make money from your content strategy in 2020

How to make money with Monetization method in 2020